After having worked his fingers to the bone, he has somehow managed to finish his professional degree course after the 3rd attempt and procured the course certificate. His mother had been cursing his stars for giving her son such a bad time, since the day he had joined the college until up to the day of his convocation. Her son had taken 7years to complete the course, where as it takes only 4 years for an average intellect.

Son is called in for an interview. Mom wakes up early in the morning and drags her son to the nearby temple where he had been only ages ago. To be precise, he had been there on the last day of his final exams. After delivering lots of Mantras and making lots of oblations in the name of her son, they finally find their way back home.  He takes his breakfast and turns on his heels for the interview.

He is not supposed to turn around and wave goodbye. His Mom has advised him not to turn back whatever may happen on his way, because it may prevent her son from being successful.

Here comes a black cat and it runs past the son, crossing his way, right when he is stepping out of the house. Now this cat is the villain of the day. Or it can be the maid too, if she was sweeping the forecourt and the son happens to see the broomstick she was holding.

Mom is engulfed by a state of panic. She is completely devastated by the sight and keeps increasing the offerings to the temple until her son gets back with the shattering news.

She had known it. She had foreseen the outcome. After all nothing worse couldn’t have happened if a cat crossed your way. That too, a BLACK CAT. His performance has got nothing to do with him losing the job. It is just “THE CAT”. 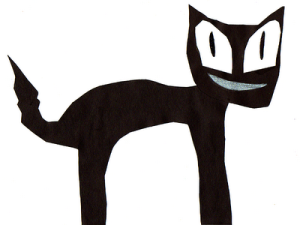 The very next day she runs to the astrologist, supposedly the best in town, with her son’s horoscope. He checks the exaltations and positions of various planets and stars until finally he makes a face and conveys the message. His son is never to be blamed. It is all to do with his horoscope. She pays him up a bundle and is relieved thinking about her son’s good times in the near future.

And this goes on.

We have reasons for anything and everything.

If you see a crow plunging itself in a pool of water, then you are in trouble, it is a bad omen.  What did the poor crow know about its bath?

If your eyes are itching you are bound to cry. Not to mind using eye drops or washing your eyes with cold water.

If you see one mynah you will hear a bad news which is capable of making you cry, but what if it is two? You are in luck. You will be happy.

You are not supposed to say “Oh! How Cute!”, when u see a new born baby as you are casting evil eye on him and trying to be mean.

Are we Indians blindly following these superstitions? They are not just crude superstitions now, rather an assembled set of beliefs thrusted upon our culture. They are the thwarters of ill luck and supposedly the bringers of good one. They also have a lion’s share in the state of well-being, long life and wealth.

If you read this article and forward it to as many as 1000 people, you will find success, happiness, wealth and good health in whatever you do. And what if you fail to do so?  Beware guys… The black days are waiting for you.

The choice is yours 😉

Here’s for you to choose!